Wrath of the Titans

Wrath of the Titans is Spectacularly Epic!
by Reymundo Salao

WRATH OF THE TITANS is the sequel to the 2010 movie Clash of the Titans. In this movie, the gods and goddesses of Olympus are dying and losing their power, while Titans that have long been imprisoned are about to rise and have their revenge against the gods and goddesses, and unleash their chaos against mankind. Perseus must travel deep into Tartarus to save his father, and stop the wrath of the titans.

The 2010 movie Clash of the Titans was battered by critics so much that there was really a conscious effort to make the sequel far more impressive than just better. And this movie did indeed meet those expectations. Great story, impressive action, and jaw-dropping visuals; WRATH OF THE TITANS is enjoyably epic.

In the dystopian future, the civilization known as Panem has lived long after war, disaster and the ravaged ruins of what was known as America. In the aftermath of the Civil War which sought to rebel against the tyrannical government, the defeated rebels were divided into several districts. And as punishment for their rebellion, every year, one boy and one girl both between the ages of 12 to 18 shall be chosen from each district and to compete in a contest where they must kill each other and only one must be victorious, a ruthless reminder that no one can oppose the authority of the Capitol. This contest is known as The Hunger Games.

The strong anticipation for the movie paid off, certainly with a strong entrance at the US box office, and critical response which was equally high also. The movie was indeed a fine movie, but after a while in reviewing it, I felt that it could have been a far more stronger movie. It was a good movie, but it did not really leave an impression upon me; and it was a bit forgettable.

Read more »
Posted by Unknown at Wednesday, March 28, 2012 No comments: Links to this post

MIRROR, MIRROR is a fantasy adventure movie adaptation of the fairy tale SNOW WHITE (AND THE SEVEN DWARVES) It’s directed by Tarsem Singh, who directed “The Cell”, “The Fall” and “Immortals”, and stars Lily Collins as Snow White, the ever-funny Nathan Lane, Armie Hammer, and Julia Roberts as the wickedly amusing Evil Queen.

This movie is something that has a little too many of almost everything you can get from a movie that promises pure fun and entertainment. It’s got funny bandit dwarves, evil magic, a monster that haunts the forest, and swashbuckling action. It is one of those movies where all the elements of the movie work so harmoniously. From the acting, to the lavish and pleasantly bizarre costumes, to the special effects, the concept, the story, and the direction itself. All these factors complement each other to create such an enjoyable masterpiece.

Read more »
Posted by Unknown at Saturday, March 17, 2012 No comments: Links to this post 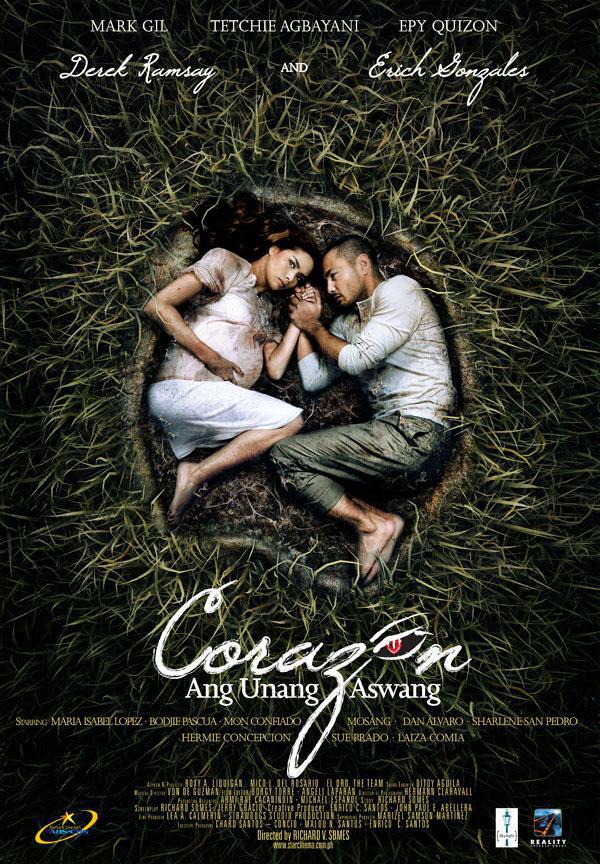 IS 'CORAZON' BOUND TO BE A CLASSIC? [review]by Reymundo Salao

CORAZON is a movie that I was hoping would be as good as YANGGAW. My initial fear was on the notion that no matter how good a director or a writer is, if it goes through studio execs and producers just like any mainstream Tagalog movie does, the original concept for the film becomes adulterated. The creative process undertaken by a writer and/or director can easily be altered by producers who are more concerned in altering the cast, creative process, and the story, without regard. And this meddling can damage the creativity of the finished product.

The movie itself is highly impressive, and if you count on a comparative scale, there are very very few Pinoy mainstream horror movies that are this good. That is why I will not be surprised if this joins the ranks of the top ten best Pinoy horror movies ever made. My judgment on it is partially on a level that considers the mass audience and was slightly adjusted to fit Pinoy cinema standards.

Read more »
Posted by Unknown at Thursday, March 15, 2012 No comments: Links to this post JOHN CARTER (it’s also entitled JOHN CARTER FROM MARS) is the story adapted from the Edgar Rice Burroughs’ Barsoom book series; about a Civil War soldier named John Carter who found himself teleported into another world where conflicts are stirring, and he ends up being the hero that seeks to restore peace on the planet.

Everything that you saw from the JOHN CARTER movie looks like a mash-up of various different carbon-copies of things you already saw in other sci-fi movies. Even in the trailers, JOHN CARTER looks like it was a montage of different sci-fi movies; nothing in it stands out to be unique or interesting.

Read more »
Posted by Unknown at Monday, March 12, 2012 No comments: Links to this post