THE BIGOTRY OF THE AMERICANS
By Reymundo Salao

It has been a week since the controversial Racial Slur that American TV Show “Desperate Housewives” has made in one of its episodes when one of the characters played by Teri Hatcher uttered a line that demeans the reputation of Filipino Doctors. Up till now, that insult has not been satisfied. …And that “Apology” made by that American network, ABC? Bahhh! They think they could just make us forget with a cheap apology? This was not just a matter of error; this was a deliberate Slap in the Face! An insult that spat onto a country already injured by a chronic lack of self-esteem.

Clearly, this show seems to represent Modern America: A bitch that hides itself in a disguise of glamour, and is constantly delusional of the idea that they’re superior above any other race on Earth. It has been an impression of mine, and now, with this bitter insult, proven true; it gives the impression that indeed Americans fancy themselves to be above all races. Basing from their history of racism, specifically during the era of the Ku Klux Klan, the Desperate Housewives show makes me wonder that with American arrogance being underlined, America could have been the country where Nazism came from. After all, Hate could be in the form of a Joke. It has now become not so much of a wonder why many other nationalities hate America. Not so much of a wonder why some races are desperate to bomb anything that is American. Some nationalities have even gave America that nickname that has long been used by the many that hate it: America – The Great Satan.

And after Desperate Housewives, comes The Daily Show with John Stuart that has made a video-clip joke where we see OUR Former President Corazon Aquino’s picture, with the word “Slut” on it. Clearly how disturbing that such an irreverent show would take pride in insulting a very revered harmless timid former leader of ours. I have been a fan of the Daily Show before. But now that they did THIS, I am deeply appalled. These American shows seem to be forgetting their own limits of discipline. The Daily Show should BURN for this. Of course, these shows would be chicken enough to make jokes of Muslim leaders, or else they will be hunted down like the dogs that they are. Sometimes, I wish we were as protective enough of our leaders as the Muslims would. But you know what? Maybe we ought to be as rabidly protective of our national pride as they do with their religion.

Furthermore, the insult was not even based on some shred of fact. If there was a joke about Corruption in the Philippine government, if there was a joke about the antique-World War 2 Era facilities that the Philippine Air Force & Navy uses, then it would be not as upsetting, because in one way or another, there is some shred of truth to such. But demeaning the Filipino Medical Society and belittling it to defamatory level… where is the shred of truth in that? In fact, many westerners even GO TO THE PHILIPPINES just to have medical operations because it is practical to have medical operations and at the same time RELIABLE. You can scour all legitimate existing records, and legitimate websites and you will find the reputation of Philippine Medical Professionals that are well known all over the world. The insult that ABC Network and the show DESPERATE HOUSEWIVES did was not even based on some manner of truth; not even based on a half-truth. Just a blind ignorant insult. No cheap apology can satisfy the damage that has been done.

They want to apologize? They have to try harder than just CHEAP APOLOGY. The ABC Network should maybe donate a hospital in the Philippines, or any medical facility. Anything that will really make them COMPENSATE for their ignorant humor. And THE GOVERNMENT SHOULD DEMAND IT.

With Desperate Housewives being a very influential show, that is seen by millions of its audiences, you can expect that it WILL AFFECT the employment of Filipino Doctors, Nurses, and other Medical Practitioners that seek to have a job in the U.S. Because of this show’s ignorant hateful remark, it is very very possible that your child WILL NOT BE WELCOMED by Employment Agencies in the US. If that happens, BLAME DESPERATE HOUSEWIVES. BLAME THAT AMERICAN ABC TV NETWORK. BLAME AMERICAN ARROGANCE. They only give us some Cheap Apology, assuming that we would be stupid enough to just take it and everything will be “okay” with us. Well we should spit it back.

If I had my way, I'd have a mass demonstration condemning this act of insult. Burning of American flags in the plaza, also of posters and merchandise that represent this TV show. But then again, let's be realistic here, there are still many of our kababayans who are jaded and UN-PATRIOTIC enough to not even give the slightest care about this insult. There are many who will still watch this show. But then again, my advice to them would be simple: 1. NEVER buy Original or Official merchandise from/of this show (include ALL of ABC Shows anyway. I’m talking about DVDs, VCDs, shirts, mugs, whatever; 2. Buy ONLY Pirated/Bootleg dvds/vcds of this show. PIRACY is GOOD. You will save money by buying Pirated DVDs/VCDs of this show. The proceeds of which will go to impoverished Filipino families that are left with no recourse but to become Pirated Products Employees; Buy ONLY Pirated/Bootleg merchandise of this show. China makes excellent Bootleg shirts of DESPERATE HOUSEWIVES. This also includes mugs, etc. Our government may have cancelled the ZTE Deal with China. Do your part as a citizen and renew ties with China by buying Bootleg DESPERATE HOUSEWIVES
Merchandise! 4. Convince OTHERS to DO THE SAME 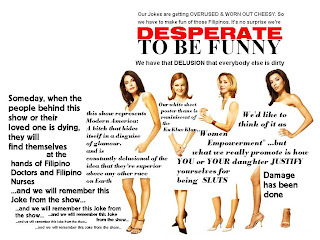 Posted by Unknown at Friday, October 12, 2007 No comments: Links to this post

The dawn of the Iloilo film industry began more than five years ago when Sine Ilonggo was organized. It was then when young Ilonggo filmmakers launched their short films on SM City Cinema, and it was then when Ilonggo audiences were first introduced to Ilonggo films, these were “Dihon”, “Hulot”, Batchoyan sa Banwa”, and other Ilonggo short films came afterwards. Among the new filmmakers that rose up during this time was Joenar Pueblo whose short film “Hablon” won a Gawad CCP Award.

I have personally known Joenar Pueblo ever since my high school years, and indeed, he has been involved, not only in theater arts, but also in the fields of literature, journalism and poetry as well. In fact, he helped me out by giving me tips in writing poetry when we were together in the University of San Agustin’s School Publication (which published the paper The Augustinian and magazine The Augustinian Mirror) He is also a very good friend and every now and then when I get to bump into him, we would comfortably discuss about movies. It wasn’t much of a surprise that he would end up making a full-length movie, despite the fact that with him now being a lawyer, one could imagine that he wouldn’t have the time to make a movie. But nothing can stop passion. No matter what you are in life, if you have the passion, you will always find time to create Art.

Developments in digital video technology has helped Independent Film-making grow. Before, it was tedious and incredibly costly to produce a full-length film, now film-making can be done with practical means. Imagination and Passion can be brought to life as films without the gigantic technical hindrances. Because of this, we are beginning to see a sort of “Renaissance Age” in the art of film. Films like “Kubrador” and “Pagdadalaga ni Maximo Oliveros” are testament to that. And now, Atty. Joenar Pueblo is giving us his new movie, the first Ilonggo full-length feature film “DAGYANG”

His crew started filming DAGYANG in December last year. With the help of such talented people as Rhodora Solis, Jigo Mambo, Eric Divinagracia, and my good friend Wilfred Galila, DAGYANG was made. The cast includes Edward Divinagracia, RLeone Gerochi, Julienne Baronda, Geoffrey Obe, Erwin Chiongson, and Joanne Paulette Libo-on, among many other cast of characters.

DAGYANG melds various stories that somehow involve Ilonggo Heritage. From the Binukot to Manoghiwit, and even to the Batchoy. With that in mind, DAGYANG is sure to be a must see for Ilonggo film audiences. Don’t miss it. DAGYANG is now showing at Robinson’s Movieworld Iloilo. Its screening schedule is 12:15 PM, 2:15, 4:15, 6:15, 8:15 PM
Posted by Unknown at Wednesday, October 03, 2007 No comments: Links to this post