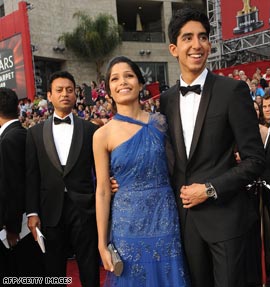 Documentary Feature
"The Betrayal (Nerakhoon)"
"Encounters at the End of the World"
"The Garden"
WINNER: "Man on Wire"
"Trouble the Water"

Documentary Short
"The Conscience of Nhem En"
"The Final Inch"
WINNER: "Smile Pinki"
"The Witness -- From the Balcony of Room 306"

For more on the stars, the speeches and the spectacle, check our source, cnn.com
Posted by Unknown at Tuesday, February 24, 2009 No comments: Links to this post No awards season would be complete without the Golden Raspberry Awards (AKA The Razzies), awarded each year to the very worst movies to hit Hollywood. This year's winners were announced on Saturday evening, and multiple-nominee The Love Guru took home not only top honors, but a couple others as well, and Paris Hilton received three Razzies as well.

Leading the pack in nominations was Disaster Movie (2 percent on the Tomatometer), which managed to earn six nominations; The Hottie & the Nottie (5 percent), up for honors in five categories; and Uwe Boll's In the Name of the King: A Dungeon Siege Tale, which also earned the Teutonic Terror a Worst Career Achievement Razzie.

Disaster Movie & Meet the Spartans (double nominee from the same writer-directors)
The Happening
The Hottie & The Nottie
In the Name of the King: A Dungeon Siege Tale
The Love Guru - WINNER

Uwe Boll and any Actor, Camera, or Screenplay
Cameron Diaz and Ashton Kutcher, What Happens in Vegas
Paris Hilton and either Christine Lakin or Joel David Moore, The Hottie and the Nottie - WINNER
Larry the Cable Guy and Jenny McCarthy, Witless Protection
Eddie Murphy and Eddie Murphy, Meet Dave

The Day the Earth Blowed Up Real Good
Disaster Movie and Meet the Spartans
Indiana Jones and the Kingdom of the Crystal Skull - WINNER
Speed Racer
Star Wars: The Clone Wars

Disaster Movie and Meet the Spartans
The Happening
The Hottie and the Nottie
In the Name of the King: A Dungeon Siege Tale
The Love Guru - WINNER

if you ask me, both Disaster Movie & Meet the Spartans are the worst movies last year. But then those movies do NOT deserve to win ANY award. Not even the Razzies.
Posted by Unknown at Monday, February 23, 2009 No comments: Links to this post

Remaking A NIGHTMARE ON ELM STREET

Director & Actor has been chosen to be the new Freddy

With their Friday the 13th remake in theaters today, this week was a good time apparently for New Line Cinema and Platinum Dunes (a company built almost entirely on the concept of horror remakes) to get things rolling for their remake of A Nightmare on Elm Street, although apparently they've decided to lose the "A" since I never see it mentioned in stories about this remake. First off, the director for the remake will be veteran music video helmer Samuel Bayer, who will make his feature debut, but is responsible for some of the 1990s most memorable videos, like Nirvana's Smells Like Teen Spirit, Blind Melon's No Rain and The Cranberries' Zombie. As for the casting of Freddy Krueger, although there had been rumors about Billy Bob Thornton a few months back, Latino Review is reporting that the current top choice is Jackie Earle Haley, AKA Rorschach in Watchmen. Filming might start as soon as later this spring.

Source: Rotten Tomatoes
Posted by Unknown at Sunday, February 15, 2009 No comments: Links to this post

Moviegoers hoping to see Denzel Washington and Tom Cruise face off on the big screen will get their chance with MGM's big-budget adaptation of "The Matarese Circle." Cruise is in final negotiations to take on the role of the Russian spy Vasili Taleniekov, the mortal enemy of American intelligence operative Brandon Scofield (Washington). "Eastern Promises" director David Cronenberg will direct the globetrotting potential franchise-launcher.

Cruise, an ownership partner in MGM division United Artists, had been considering several projects, including the Spyglass Entertainment thriller "The Tourist" and the Universal comedy "Food Fight." Reps still are working out where the "Matarese" shoot will fit in chronologically. But committing to "Matarese" keeps Cruise playing home-team ball as he is developing a number of potential producing and starring projects at MGM and UA. The "Matarese" property could benefit Cruise's acting career as well because it represents a return to the high-tech action milieu that served him well in the "Mission: Impossible" franchise most recently visited in 2006.

Adapted by "Wanted" scribes Derek Haas and Michael Brandt, as well as Cronenberg, from a 1979 Robert Ludlum novel, the "Matarese" story line revolves around the longtime archenemies who are forced into a distrustful collaboration against a wide-reaching political conspiracy orchestrated by a mysterious organization called the Matarese.

Ludlum drew inspiration from David Rockefeller's Trilateral Commission in the 1970s, but the screenwriters have updated the time frame from the Cold War to a contemporary setting.

After "Quantum of Solace," MGM regains sole proprietorship of the James Bond juggernaut, and Guillermo del Toro's two-part adaptation of "The Hobbit" is in the works. But neither is likely to see screen time before 2011 or 2012. Ludlum wrote a follow-up to "Matarese" in 1997 called "The Matarese Countdown," to which the studio also has acquired the rights. The CAA-repped Cruise most recently starred in the UA release "Valkyrie," which has grossed $139 million worldwide. He also appeared in a high-profile cameo for the DreamWorks comedy "Tropic Thunder."

[Read the FULL STORY here]
Posted by Unknown at Thursday, February 12, 2009 No comments: Links to this post

In January when trade reports announced that Mickey Rourke was in talks to play a villain in Iron Man 2, it was believed that he would take on the role of Crimson Dynamo. Robert Downey Jr. tells MTV that doesn't seem to be the case, however:

"That's actually incorrect," Downey told MTV News when asked if Rourke was being considered for the aforementioned Iron Man rogue. When pressed if, instead of Crimson Dynamo, Rourke was up for the role of Whiplash, another potential role bandied about on blogs these days, Downey had a more cryptic response.

"I can neither confirm nor deny that," said Downey. "Or maybe it's some semblance of both. Here, I can tell you everything about the story except I won't give away the ending. The nerd stuff is top-drawer security."

Stay tuned for possibly more on his role soon. Iron Man 2 is scheduled for a May 7, 2010 release.
Posted by Unknown at Sunday, February 08, 2009 No comments: Links to this post

RAMBO will be back!

Rambo's sneaking upon us again
Not Another RAMBO!
Stallone broke the news to "Extra" about the latest Rambo film, saying, "Yeah, we are doing another 'Rambo,' but the conflict is whether to do it in America or a foreign country."
FULL STORY here [source: EXTRA]

I am a BIG BIG fan of the RAMBO movies. But this news of doing a new one scares me. The last one was excellent enough, served as a sequel to clean up the shame of Rambo 3, and also served as a good "series ending" to the Rambo saga. The last movie was so good that you'd prefer the series to end right there with some sense of gracious pride, rather than have a sequel that threatens to tarnish the entire series. Sure, I am excited for the next RAMBO movie. Sure, I'm gonna watch it. But if you ask me, as of right now, I'd rather this sequel not exist.
Posted by Unknown at Wednesday, February 04, 2009 No comments: Links to this post