The EXORCISM of EMILY ROSE 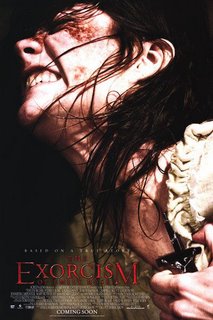 The EXORCISM OF EMILY ROSE: The True Story of a Very Horrific Experience
By Reymundo Salao

This movie is LOOooONG delayed. Many of my friends were so excited to watch this EONS ago. Officially released in September 9, 2005. Released in Manila November 23, 2005. And released in Iloilo just this week? Tsk tsk!

Based on a true story, THE EXORCISM OF EMILY ROSE tells the tale of a failed exorcism on a devout colleg girl named Emily Rose (played by Jennifer Carpenter), which then, leads to her death, medically due to various severe wounds and lack of food intake. After which, Father Moore (played by Tom Wilkinson), the priest administering the exorcism rites was put on trial for the crime of Homicidal Negligence. In his aid as counsel is Erin Bruner (Laura Linney), an agnostic whose experience in handling the case later makes her a believer in the forces of light and darkness that do exist in this world. But Father Moore is not actually concerned whether he ends up in prison or not; what concerns him is to tell what really happened to Emily Rose… and why.

Very much endorsed by the Catholic Bishops Conference of the Philippines, this movie is one of those rare faith-affirming movies that achieves in giving Christian beliefs a big deal of credibility. “…Emily Rose” actually delves into the courtroom investigation of the events that transpired before Emily Rose's death. So most of the scenes we see are actually flashbacks of the story. One must not expect Emily Rose to be one of those cheap attempts to copy "The Exorcist", neither is it a movie that tries to climb on to the horror-movie-trend. This movie is more of an interesting mind-opener than just some cheap horror ride. You will never see the cliché of suspense chases, numerous CGI monsters, or needless bloodshed and gore. The closest thing it can be of comparison with may be one of those occult episodes of the X-Files. Just a bit more scary.

But horror fans may not go home empty-handed. It does give sufficient creep-factor to give enough tingles down your spine. The horror of Emily Rose is not in quantity, but in quality. What is the point of cramming the film with a big bag of horror scenes if these were not even scary, anyway? The horror may be few, but it succeeds in giving the chills. Plus, it is based on a true story; the true story of Anneliese Michel, a young German woman who suffered the same fate as the fictional Emily Rose in the 1970s. These events can also be found in the book titled "The Exorcism of Anneliese Michel" by Dr. Felicitas Goodman. The factuality alone doubles one's fear factor of this film.

There seems to be a great deal of duality and balance in the movie. Basically, it tells of a classic tale of the forces of good versus the forces of the devil. There are good lawyers, which is represented by Atty. Erin Bruner, and there is the other side, represented by her courtroom adversary Atty. Ethan Thomas' sneaky harassing tactics, and Bruner's Law Firm which attempts to control the trial with their own interests. There are good priests, represented by Fr. Moore. And there's the evil side of that represented by the Archbishop's intentions of keeping the truth from being told, so as to just protect their own reputation. And of course, up to the obvious power of God versus the power of the devil.

Laura Linney is brilliant as the lawyer Erin Bruner. But it is Tom Wilkinson as Father Moore that catches my attention. The last time I saw him, he was a cold-blooded mob boss in “Batman Begins”. Now he's a pure-hearted and valiant priest who must face the devil and the possibility of imprisonment. The one who deserves the applause, though, is Jennifer Carpenter as Emily Rose. Her portrayal of a girl in sheer agony of being possessed by the devil is a pure eerie performance. Her beauty alone gives a very 1970's “Karen Carpenter (are they related, anyway?) look” ...and Karen Carpenter freaks me out. Wake me up at 3 in the morning with a Karen Carpenter song and i will scream like a little girl.

THE EXORCISM OF EMILY ROSE is very original, very interesting, and above all, creepy. Nowadays, real horror movies do not rely on flashy special effects; just the impact, the storyline, and the acting can turn a horror audience white with fear (I bet “…Emily Rose” has a cheaper budget than “Shake Rattle & Roll 2K5”). In the category of horror movies and movies with the topic of Christianity, “…Emily Rose” is a MUST-SEE. You won’t regret THE HELL out of it.

sory to burst your bubble but The Exorcism of Emily Rose cost US$20M to make. Shake Rattle and Roll, despite its effects, cost less than 100m PESOS to make.